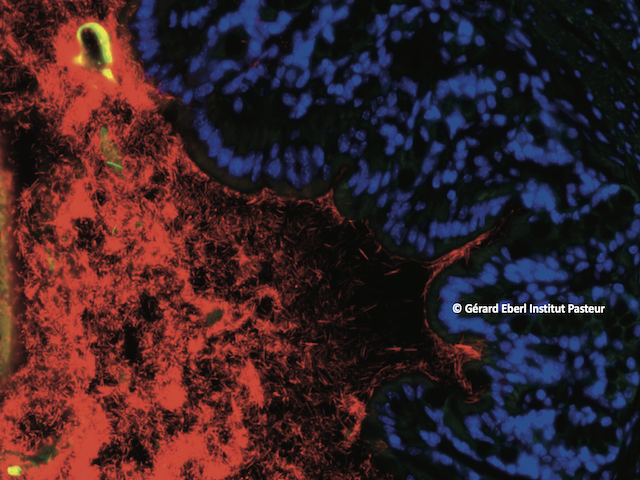 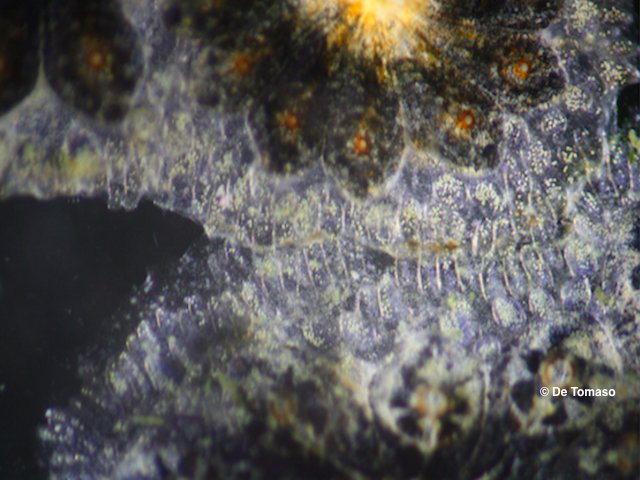 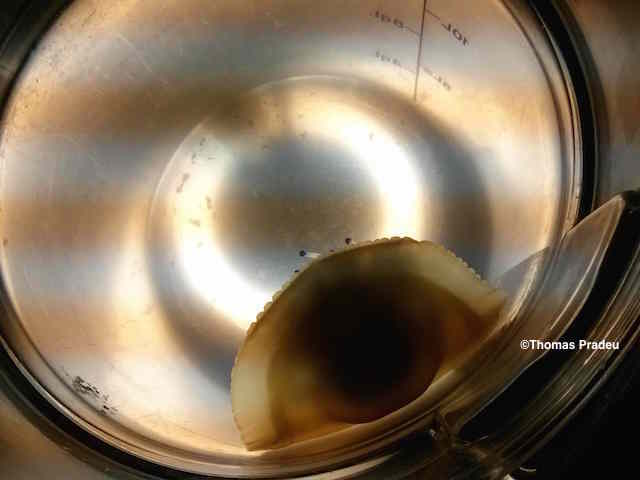 PhilInBioMed is both an interdisciplinary institute located at the University of Bordeaux, France, and a national and international network of interdisciplinary teams. Created by Thomas Pradeu in 2017, PhilInBioMed aims at promoting philosophy in the biological and medical sciences, a co-production of knowledge by the direct interactions of philosophers, biologists, and medical doctors.

The June 2022 PhilInBioMed Magazine is out! 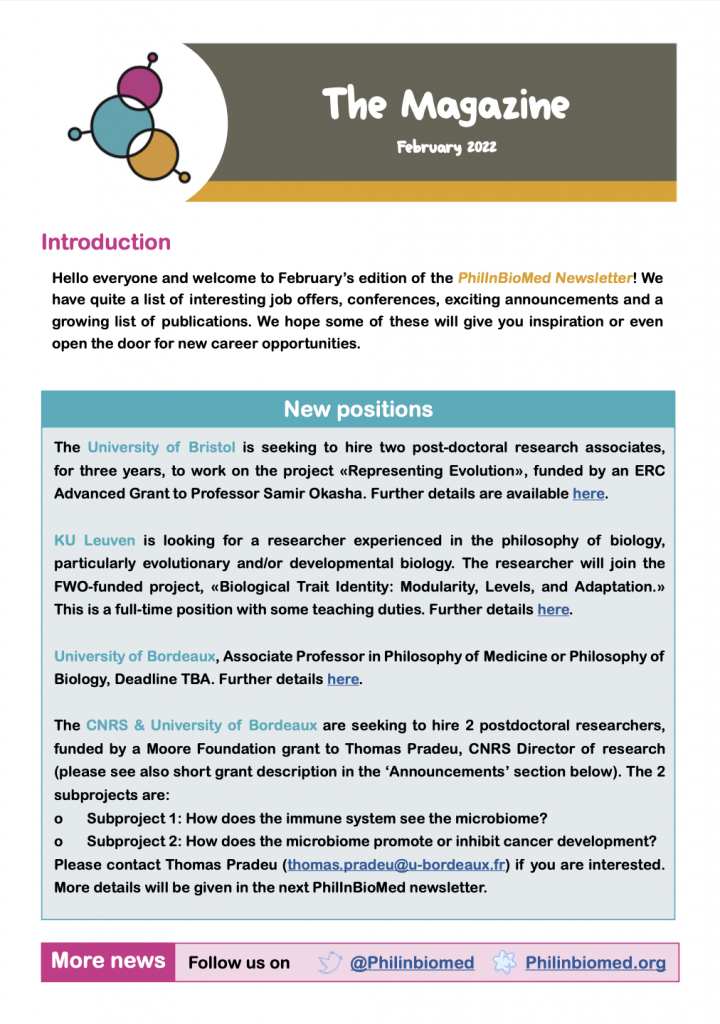 We are happy to share the PhilinBioMed newsletter for February 2022.

You can read it via this link. 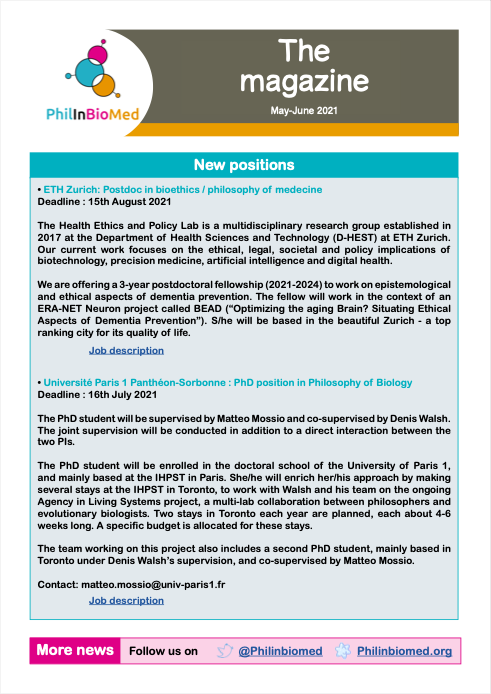 PhilinBioMed Newsletter – May and June 2021

We are happy to share the PhilinBioMed newsletter for May and June 2021.

You can read it via this link.

A question, a position to advertise?

If you have any questions, and/or if you would like to advertise an interdisciplinary position (wherever in the world), please contact us.

IDEM is an ERC-funded project (2015-2020) located at the interface between philosophy of biology and biology. Hosted by the CNRS in Bordeaux, France, IDEM is conducted by Thomas Pradeu.
More information about this project here.

The definition of the tumor microenvironment

Initiated by Jean-François Moreau, this project is based on the idea that mobility is central to immunity. In the transition from unicellularity to multicellularity, all cells have mostly lost their mobility – except for the immune cells. We are interested in better characterizing this link between immunity and mobility, and the way it emerged through evolution. On this ground, we propose a novel hypothesis about aging and immunosenescence, based on the idea that the increasing stiffness and cross-linking of the senescent ECM lead to progressive immunodeficiency via an age-related decrease in T cell mobility and the death of these cells.
People involved in Bordeaux: Jean-François Moreau, Leonardo Bich, Thomas Pradeu.
PI: Jean-François Moreau
Partners: Daniel Choquet, Claudio Franceschi.

Abstract
The origin of RNA interference (RNAi) is usually explained by a defense-based hypothesis, in which RNAi evolved as a defense against transposable elements (TEs) and RNA viruses and was already present in the last eukaryotic common ancestor (LECA). However, since RNA antisense regulation and double-stranded RNAs (dsRNAs) are ancient and widespread phenomena, the origin of defensive RNAi should have occurred in parallel with its regulative functions to avoid imbalances in gene regulation. Thus, we propose a neutral evolutionary hypothesis for the origin of RNAi in which qualitative system drift from a prokaryotic antisense RNA (asRNA) gene regulation mechanism leads to the formation of RNAi through constructive neutral evolution (CNE). We argue that RNAi was already present in the ancestor of LECA before the need for a new defense system arose and that its presence helped to shape eukaryotic genomic architecture and stability.
Read more.

The Evolution of the Hallmarks of Aging by Lemoine M

Abstract
The evolutionary theory of aging has set the foundations for a comprehensive understanding of aging. The biology of aging has listed and described the “hallmarks of aging,” i.e., cellular and molecular mechanisms involved in human aging. The present paper is the first to infer the order of appearance of the hallmarks of bilaterian and thereby human aging throughout evolution from their presence in progressively narrower clades. Its first result is that all organisms, even non-senescent, have to deal with at least one mechanism of aging – the progressive accumulation of misfolded or unstable proteins. Due to their cumulation, these mechanisms are called “layers of aging.” A difference should be made between the first four layers of unicellular aging, present in some unicellular organisms and in all multicellular opisthokonts, that stem and strike “from the inside” of individual cells and span from increasingly abnormal protein folding to deregulated nutrient sensing, and the last four layers of metacellular aging, progressively appearing in metazoans, that strike the cells of a multicellular organism “from the outside,” i.e., because of other cells, and span from transcriptional alterations to the disruption of intercellular communication. The evolution of metazoans and eumetazoans probably solved the problem of aging along with the problem of unicellular aging. However, metacellular aging originates in the mechanisms by which the effects of unicellular aging are kept under control – e.g., the exhaustion of stem cells that contribute to replace damaged somatic cells. In bilaterians, additional functions have taken a toll on generally useless potentially limited lifespan to increase the fitness of organisms at the price of a progressively less efficient containment of the damage of unicellular aging. In the end, this picture suggests that geroscience should be more efficient in targeting conditions of metacellular aging rather than unicellular aging itself.
Read more.

Between mechanical clocks and emergent flocks: complexities in biology by Gross F

Abstract
Even though complexity is a concept that is ubiquitously used by biologists and philosophers of biology, it is rarely made precise. I argue that a clarification of the concept is neither trivial nor unachievable, and I propose a unifying framework based on the technical notion of “effective complexity” that allows me to do justice to conflicting intuitions about biological complexity, while taking into account several distinctions in the usage of the concept that are often overlooked. In particular, I propose a distinction between two kinds of complexity, “mechanical” and “emergent”, which can be understood as different ways of relating the effective complexity of mechanisms and of behaviors in biological explanations. I illustrate the adequacy of this framework by discussing different attempts to understand intracellular organization in terms of pathways and networks. My framework provides a different way of thinking about recent philosophical debates, for example, on the difference between mechanistic and topological explanations and about the concept of emergence. Moreover, it can contribute to a proper assessment of metascientific arguments that invoke biological complexity.
Read more.